Today, Lijnbaanstraat, an extensively paved and unattractive car park in the commercial centre of Ostend, is being transformed into a green oasis. The street thus not only serves as an appealing garden for city dwellers, but is also an important asset for combating heat stress. The project is part of the European Cool Towns project.

The new layout of Lijbaanstraat was preceded by a temporary pop-up garden in 2019, with a manned info box where residents could find out about the plans and make suggestions for the permanent redesign. Among other things, the lighting plan is tailored to reflect the comments of the residents, as is a rich, varied planting plan with climbing plants on the facades.
The green, cool design stems from the city's Administrative Agreement, in which a low-traffic city centre prioritising soft road users is one of the objectives. The project was supported by the Interreg 2 Seas programme 'Cool Towns', a collaboration involving 13 European partners, including research and academic institutions, government organisations and companies with expertise in climate adaptation.
Cool Towns strives to combat the negative effects of climate change and find attractive solutions, specifically aimed at reducing heat stress.

In the run-up to a new purpose for the car park on Lijbaanstraat, local residents were able to explore the possibilities during a temporary garden and info box. 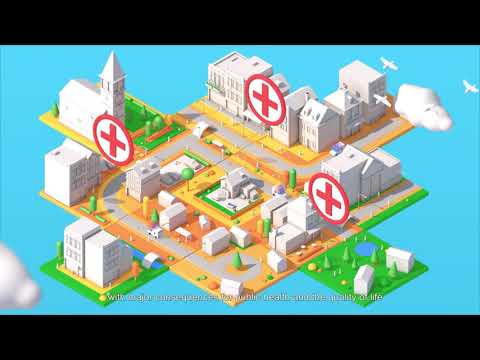 videoCool Towns
Cool Towns is a collaboration involving 13 European partners and focuses on counteracting the negative effects of climate change. The project strives to find a solution to prevent or reduce heat stress in the city centre.

Cool Towns is a collaboration involving 13 European partners and focuses on counteracting the negative effects of climate change. The project strives to find a solution to prevent or reduce heat stress in the city centre.

photo: Leen Belpaeme, HLN, 2019
hln.be
fileCool Towns Heat Stress Measurement Protocol
In the context of the Cool Towns partnership, a tool has been developed to index heat stress on a small scale. The initiators hope this will make it easier for policymakers to tackle the negative effects of climate change by finding appealing spatial solutions and the right investors to implement them.