Planned sewerage works prompted a total revamp of the Edegemsesteenweg, including a park and two school zones. Water that was previously drained invisibly underground is now afforded a very prominent place in the street scene. A number of obstacles had to be overcome to achieve this.

The road, a grey two-way street with no cycling infrastructure, suffered from regular waterlogging in the densely built-up area. A coalition comprising the Antea Group, Aquafin, De Lijn, the Roads and Traffic Agency (AWV) and the utility companies designed and realised a 'rainwater axis', which discharges the rainwater in a controlled and gradual manner into the Edegem brook.
The water is infiltrated as much as possible into various wadis, infiltration basins and a large new playground in the park, with the famous 'soup bowl' forming a landmark in the area.
A buffer basin was installed below the soup bowl in order to slow down the flow of water from the streets higher up. Further down the road, a channel was created to drain the surrounding built-up area and that of the technical institute. The combination of interventions represents a major step forward and sets a new precedent for Flanders.
Bringing the water above ground was not without its challenges; the team had to work hard to allay local residents’ concerns about odour nuisance, litter and vermin. This was easier when the benefits of the redevelopment became visible: a higher quality living environment that provides space for residents to meet up and relax.

Edegemsesteenweg rainwater axis in the spotlight

The above-ground and underground layout of the street are complementary. Various interventions to allow the water to infiltrate and slow it down were combined using a new mobility logic and green spaces for play and encounters at ground level. 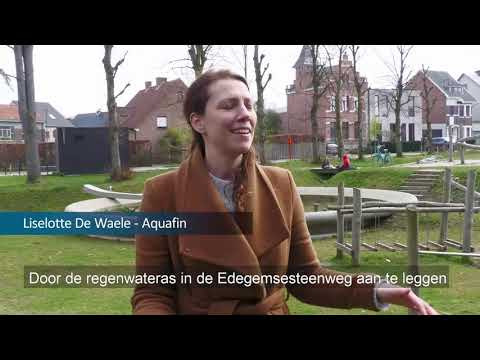 photo: Infopunt Publieke Ruimte / Antea Group, Kontich 2021
articleEdegemsesteenweg in Kontich
The approach subject to certain preconditions, measures, implementation aspects and management around Edegemsesteenweg make it clear why the project is a pioneer in the field of water management in public spaces.