In 2022, a new park will be created on the Materialenkaai opposite Tour & Taxis in the Brussels Canal Zone. Allée du Kaai was created in 2014 as a temporary project in anticipation of the redevelopment of this zone. At the request of Brussels Environment, Toestand vzw is focusing on the development of a social dynamic in the district as a stepping stone towards the future permanent redevelopment of the site.

An area has been earmarked for redevelopment at the Materialenkaai, between the Havenlaan and the canal in Brussels. In 2022, a new public city park will be created there at the initiative of Brussels Environment and Beliris. The hangars and outdoor space on the site had not been used for some time before 2014. In anticipation of the permanent redevelopment, Brussels Environment launched a public tender with the aim of reusing the vacant hangars and the outdoor space until then. Toestand vzw was awarded the contract. At the site, which occupies no less than 9,000 m2, the first and to date the largest 'Spontaneous Action Zone' Allée du Kaai has been completed. It transformed the collection of empty warehouses, squeezed between the densely populated Maritiemwijk and Northern Quarter, and an undefined outdoor space into a vibrant place for encounters. It is the first time a public service has set up and led a temporary project in the Brussels Region.

Toestand focuses on the temporary use of empty buildings and abandoned space, with the aim of contributing to an inclusive and united city. In Brussels, about 6.5 million square metres of office buildings, houses, industrial buildings, etc. are empty. By making space available to organisations with spatial needs Toestand strives to prevent space going to waste and use it in a meaningful way for the city and its inhabitants. Allée du Kaai thus offers local and supra-local, socio-cultural projects the opportunity to expand. (Temporary) vacant sites create opportunities for organisations and individuals and brings people together. Toestand is committed to initiating a social dynamic and strengthening the socio-cultural urban fabric in the neighbourhood in the run-up to its definitive purpose. Because of the transient and experimental nature of temporary use, the social, cultural and ecological needs of the neighbourhood can also be met quickly. The temporary purpose offers the opportunity to map out the needs of the mixed neighbourhood, to experiment and to (re)evaluate. In the 'meantime', the insights can help shape the future use of the site.

Allee du Kaai is home to about thirty organisations that develop all kinds of activities for highly diverse target groups, both from the neighbourhood and beyond. The activities range from screen printing, bicycle repairs and discussion tables to an indoor skate park and a community kitchen. Encounters, action and creation are key. Toestand brings the network of more established organisations, small-scale initiatives or committed local residents together, takes care of the external and internal communication and fulfils a logistical and coordinating role at the site. All partners work together to design the site and elaborate the programmes. Toestand strives to fill gaps in today's traditional civil society, by providing space to new forms of organisations that focus on self-organisation and the common interest.

Allee du Kaai in the spotlight

Allee du Kaai turned the vacant warehouses on Materialenkaai and the undefined outdoor space in between into a vibrant place for encounters for the neighbourhood.
imageAllee du Kaai design
Toestand's new interpretation of the site as a 'Spontaneous Action Zone' strives for an inclusive and united city and makes space accessible to anyone who needs it. 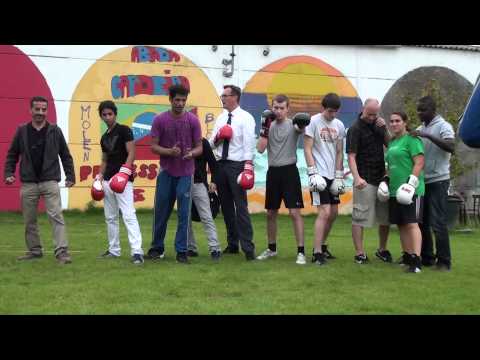 videoVisiting Allee du Kaai
In anticipation of the permanent redevelopment, Brussels Environment launched a public tender with the aim of reusing the vacant hangars and the derelict outdoor space in the meantime.

In anticipation of the permanent redevelopment, Brussels Environment launched a public tender with the aim of reusing the vacant hangars and the derelict outdoor space in the meantime.

photo: Leefmilieu Brussel, Vlaamse Overheid, 2014
articleEmpty space. Guide to using empty space
Toestand bundles and disseminates its experience and knowledge on the temporary use of vacant buildings and abandoned space. Knowledge sharing contributes to the replication of such projects.

toestand.be
articleHow to Nurture Flourishing Cultural and Creative Hubs: Lessons from the Netherlands
Allee du Kaai is home to about thirty organisations that develop all kinds of activities for highly diverse target groups, both from the neighbourhood and beyond. Toestand's role is to create an ecosystem in which established organisations, small-scale initiatives and committed local residents can shape the place together.